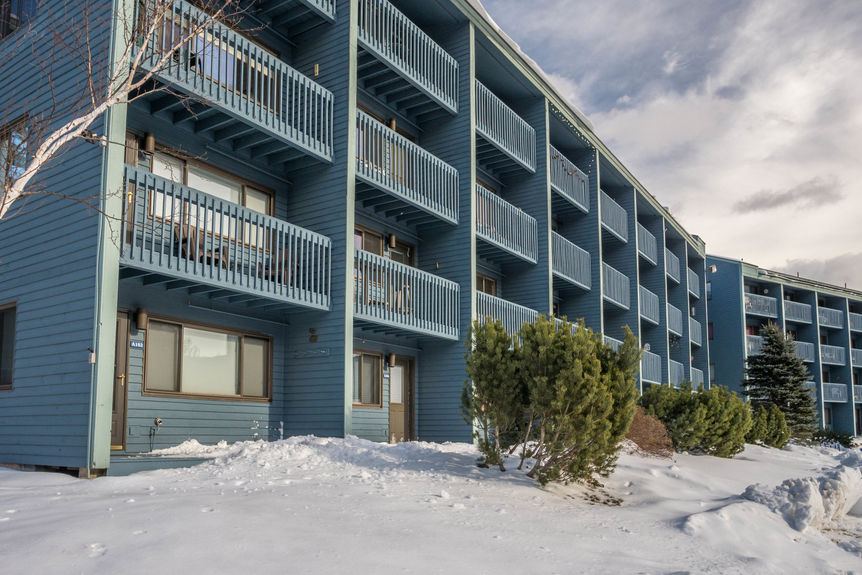 Comprised of two buildings that run along the Roadrunner trail, Brookside condos are slopeside at Sunday River, and arguably one of Sunday River Resort’s most iconic condominium complexes.  Constructed in 1986-1987, it boasts 48 two-bedroom units in Building I and in Building II, 64 one-bedroom units and 32 studios.  The buildings are laid out hotel style, with the condos off of long hallways.  It has a separate building that houses its community and owners’ rooms, Men’s and Women’s locker rooms and dry sauna, and its pool and hot tub are outside and heated year-round.  The trail access is just a short ski or ride to the Tempest lift in the White Cap base area.  The Roadrunner trail is one of the most accessible on the mountain, and those looking to get in a nice long run will enjoy a trip from the top of the Jordan quad (Lift 14) all the way to Roadrunner.  The two-bedroom units are 810 square feet and have one bath.  Some have a Murphy bed in the living room and the units have gas fireplaces.  They are laid out nearly identical to the North Peak condominiums except with the addition of a deck.  Units that have an even number (for example, 208) have views of the slopes of White Cap to Locke Mountain or Barker Mountain.  The bi-level one-bedroom units are either 528 square (lower level) or 567 square feet (upper level).  The studios are 377 square feet and laid out similar to the one-bedroom units except no separate bedroom.  Each complex has large owners’ ski storage lockers and coin-operated laundry.  Owners who wish to rent nightly or weekly may do so on their own or through a private agency such as Vacasa.