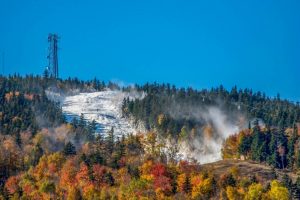 Since the last market update, T2 and Sunday Punch have been covered top to bottom in snow and the 2015 buzz word is “snowliage”.   Sunday River was able to open for some of its best, earliest conditions in my memory (which dates back 15 years in Newry).

The second half of the summer and early fall marked another robust period with August in particular standing out with an atypical number of showings and inquiries. I base my opinions on my own experience with my Buyer clients but also based on activity with my listings.

My report includes Albany Township, Bethel, Greenwood, Hanover, Newry and Woodstock, and primarily consists of homes with sale prices of $150,000 and above, most land and condominiums.

Starting with single-family homes, there were 34 homes that sold in the period, 12 of which were chalets, which seems a little less weighted than usual and just five were in Newry, another statistical anomaly.

Topping the list in Newry were home in The Peaks that sold at $1.25 million, and in The Colony and Mahoosuc Glen at $760,000 and $740,000, respectively. Others in Newry included chalets on Monkey Brook and in The Peaks that closed at $465,000 and $444,400, respectively.   Just across the street from the chalet on Monkey Brook a charming, vintage contemporary sold for $152,000 (pause for fun story…I was just getting ready to show this house one summer day and the daughter of the original owner/builder who sold the house more than 30 years prior, showed up with her young family. She lives in New Jersey and wanted her kids to see where she grew up. Nothing had changed, right down to the wallpaper!).

Over the weekend I was on the phone with a wise woman whose family dates back six generations in the Bethel area. She was questioning a client’s interest in her land (she has a keen interest in land preservation) and she reminded me very matter of factly that “they aren’t making it anymore.” Touché. Fortunately for me my client shares the same philosophy and I think has even uttered the same phrase.

So after that segue, there were 19 total parcels sold in the marketplace during this period, which is the exact number as the year before during this period but notably less than the 30 parcels in 2013. My bent? A spate of lots sold in that year that eventually became spec home lots, and also notable is that most were in existing subdivisions.

This year, in this time period, which is admittedly random, there were three parcels in Newry sold, including a 421 acre parcel off the Bear River Road for $299,900 and lots in The Peaks (2.96 acres for $170,000) and Peaks Village, .39 acres for $93,000.   The latter two have commanding views of Sunday River slopes of course.   There was an 85-acre parcel that sold in Greenwood for $322,500, the priciest during this time period, though there may be recent sales in the slope side development, The Glades in Newry, in a higher range. These stats are strictly what is recorded on the Multiple Listing Service (MLS).

Lots of statistics but my goal as always is to provide a snapshot to our agency Buyers and Sellers (or prospective ones at that). And as always, contact us if you would like more information on properties in the Greater Sunday River region. Happy, snowy days ahead.