I bumped into a client recently at our local building supply store (now that the bears have hibernated it’s time to stock up on bird seed) and he mentioned how he was looking forward to my next market update.  I was both embarrassed and humbled. The real estate landscape has changed rather dramatically since the last one, and therein was the problem, how do I catch up and explain it all from my perspective?  Here goes!

The assumption is that the Sunday River market escalated along with much of the country due to Covid, as metropolitan folks sought out refuge in natural environments where they could enjoy the outdoors and have plenty of elbow room to do so – the flexibility allowed with remote working and schools made it possible. And much of this is true, not only did these factors come in to play, but the pandemic brought a whole new demographic to our region.  I remember during the lockdown and in the ensuing months I saw more New York plates than ever before – having grown up in Vermont I was accustomed to it, but pre-March 2020, I would see only the occasional orange plate.

But it wasn’t only the world-transforming virus that led to lower inventory, higher demand and subsequent price increases.  Prior to the days of Dr. Fauci being on stage daily, there were subtle signs that the inventory was shrinking, and Buyers were paying more than any historical pricing.    As an example, where they would generally be ten to 20 slope side condominiums available, the inventory was more regularly under 10 leading in the months leading to the pandemic.  Two-bedroom hotel style units (think North Peak and Brookside) 2018 sold in a range of $152,000 to $239,000 and there were 17 closings, and in 2019, the range was $172,000 to $250,000 and just five sales.

And then we get to 2020. In this year, there were seven of these units sold, ranging from $230,000 to $313,000 and important to note, three of these were Pending prior to the pandemic lockdown.  I have always been fascinated by our market ebbs and flows and factors that contribute, whether it’s snow (or lack thereof), economy, or why a certain Sunday is quiet at the resort because the Pats were playing early.   My theory on the upward trend we were already experiencing was due to a building momentum from the sale of the resort to Boyne Properties (it had been the lease operator under two REITs), a move that appeared to me led to a renewed commitment to invest in Sunday River’s future.

With this said, the pandemic absolutely gave impetus to an already positive market. The new sector that discovered Sunday River (and Maine) created new Buyers, already-existing homeowners wanted larger spaces with the newfound ability to spend more time in the mountains, and outdoor enthusiasts in the pandemic’s wake embraced Carpe Diem and sought their refuge homes.   The inventory continued to dwindle, and desirable properties went on the market with the expectation of multiple offers.  Escalation clauses became the new norm.  That two-bedroom unit that sold for $313,000 in 2020? It sold for $400,000 a little more than a year later, with no changes to the property.   But this sale pales in comparison when you look at other numbers: In 2018, Locke Mountain units traded in the $400,000 to $500,000 range; two sold last season at $1,325,000 and $1,400,000.

In my observations over my 17 years of selling at Sunday River, I have noted that the trends start with the condominium market followed by single-families, and then land.  This rang true again.   For simplicity, I compare three- to four-bedroom chalet sales within the access road area (anything past the Sunday River Brewing Company).  In 2018, there were 9 sales ranging from $250,000 to $600,000. The following year, there were 22 sales ranging from $250,000 to $795,000, and the highest one was on the same street and similar specs as the $600,000 sale the prior year. So again, subtle evidence of a changing market.  Flash forward to today with the same criteria, starting in July of 2020 to date (which, would be about the time properties closed after going under contract in the pandemic’s wake) sales ranged from $420,000 to $1,475,000. The compelling part, though, is that 13 of these were higher than the $795,000 top end price point from 2019. The resort in 2022 also saw its highest ever single-family home sale price at $4 million, and sales above $1 million have become commonplace. I have said many times, Sunday River has finally caught up with Vermont pricing.

The flurry, though, was incredulous, even for a seasoned broker like me.  Could it stop? Would it stop? It seemed there were new pricing thresholds weekly.  By the time we got in to summer of 2022, a little bit of change was in the air. I had more clients and friends traveling than to Europe than I could keep track. There was talk of rising interest rates, inflation, economic shifts.  And as prices continued to rise, buying for many properties calmed – whether due to distraction, concern or resistance. Not every new listing was a multiple. Not every property sold in days. Some sold in weeks, and some (egad!) even had price reductions.

As the landscape seems to be shifting ever so slightly again, I watch. And watch. I have still experienced or witnessed multiple offers or quick sales, mostly for unique or highly desirable properties, or simply ones that are priced more competitively (a recent well-priced off mountain two bedroom that I listed garnered five offers).  I have referred to this current trend as a “transitioning” market.

And this may raise eyebrows for some, but my gut on what will be the real indicator in the coming weeks is snow. A few of you will remember Les’s mantra, “it’s the snow stupid.”  Well, snow affects our market too. I believe as we head full steam into the season in the next days and weeks and folks begin really enjoying the slopes, that it will trigger increased across the board interest in inventory.  While of course Sunday River Resort is a snowmaking powerhouse, some white on the ground is festive! Sometimes all of the other factors are less important than sheer momentum fueled by Mother Nature.

So hopefully my client, Jim, will appreciate this Broker’s take on the market. I am glad he gave me the nudge.

Happy Holidays and enjoy the snow! 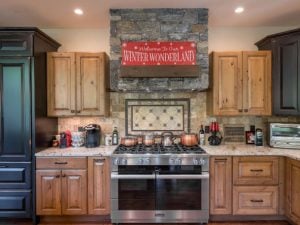